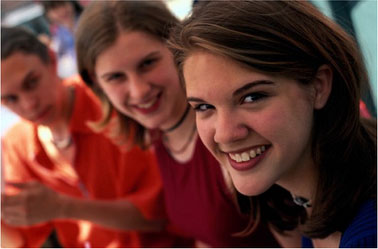 This story was written some years ago by a girl called Lynn MacGee. Read the two parts of the story and answer the questions after each part. Your answers must be in English

Hi,
My name is Lynn and I come from a small village in the north-east of Scotland. I am a twenty-year-old student presently spending a compulsory year of study in Sweden. In the summer I shall return to Great Britain, where I shall then resume my studies at University College London. Within the next two years I hope to graduate and gain my degree in Scandinavian Studies.

I’ve been living in Sweden for the past six months. As well as studying I work in a restaurant to earn a little extra money. So far my time here has been great fun. I’ve met lots of new people and my ability to communicate in the Swedish language has improved rapidly.

I’m often asked: “Why did you come to Sweden?” and “Why did you learn Swedish?” I suppose people ask suchlike questions because it is not a very large country and the language is not widely spoken in the world, so Swedish people feel it is strange that foreigners take an interest in their country. Consequently, I can answer these queries rather quickly. Four years ago, before I entered my final year of Secondary School I decided to become an exchange student and take a ‘year out’. My reasons for this varied, but basically I was a bit bored and felt I needed a break. So I decided that a year abroad, living with a host family, experiencing a new language and culture would be an invaluable experience.

Where does Lynn come from?

What different things is Lynn doing in Sweden at the moment?

What are her plans for the summer and for the next few years?

What does she say about her knowledge of Swedish?

Why does Lynn think Swedish people find it a bit strange that she went to Sweden?

What was Lynn’s main reason for becoming an exchange student in 2005?

I spent the year 2005–2006 in a rather small town in the south of Sweden, where I was placed in the third year at the local “Gymnasiet”. I must say I had one of the toughest but best years of my life. I made some great friends and grew up a lot during my year. One of the most interesting things about my year was realising the contrast between a typical Swedish school and a typical Scottish one and the differences between how teenagers live.

For one thing, in Scotland you start school when you’re younger, at the age of five, but the school leaving age is about the same as in Sweden, I think. Also, in Scotland nearly everyone wears school uniform and addresses their teachers as ‘Mr’ or ‘Miss’. I must say that, in my opinion, in Sweden the teacher tends to be more of a friend to the student and respects the student more.

Teenagers generally don’t differ that much throughout the Western world and the Scottish teenager is no different. However I did detect some small differences between Scottish and Swedish teenagers that were rather prevalent.

One difference is that in Scotland most teenagers are financially quite independent by the age of sixteen—nearly all my friends had part-time jobs. Indeed in the last five years I have experienced the trials and tribulations of being a waitress, shop- assistant, factory-worker, fruit and vegetable packer, strawberry picker as well as a baby-sitter. Earning your own money at the age of fifteen teaches you the value of money as well as giving you the freedom of going out and buying whatever you want without a guilty conscience.

It is quite clear to me that the world is changing rather rapidly and I am living in a time where opportunities are abundant. At the age of twenty I feel that my life hasn’t really begun and I still have many hopes, dreams and ambitions I want to fulfil. This is in comparison to my mother, who by the age of twenty was married with a child, and this was the accepted thing to do. I want to complete my studies, then I want to travel for a few years and do some voluntary work. I think travelling and experiencing different cultures is the most valuable source of education. Ideally everybody should have an opportunity to travel, as I feel world and cultural understanding would play a big part in creating world peace.

It is extremely difficult to try and imagine what the future holds for me. I am interested in many different things. At some stage of my life—hopefully quite soon— I would like to join a theatre school. At home I have been in several theatre productions and I personally don’t think you can experience a better feeling than standing up on stage and giving the audience pleasure.

At the moment I am young, free and single and the thought of marriage has never really occurred to me. In fact, it scares me. I imagine one day in the far future it would be nice to settle down and have children. However, for the time being, I would just like to continue to have a good time with my friends. Laughing, talking and dreaming of what future lies ahead for me.

What differences did Lynn find between a typical Swedish school and a typical Scottish one?

How does Lynn describe the economic situation of most Scottish teenagers?

What is Lynn’s opinion about teenagers making money?
Why does she think so?

What do we know about Lynn’s mother?

Lynn wants to complete her studies and spend time with her friends.
What other ambitions does she have for the next few years?